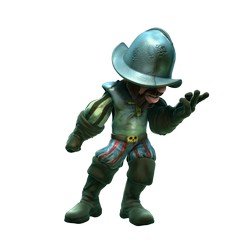 Gonzo’s Quest is set back in 1541 off the coast of Peru, the tale tells of the Spanish explorer’s in search of ancient gold and treasure…our friend Gonzo has another idea though. In the dead of the night Gonzo steals the map leading to the treasure and jumps off board to swim to the island Eldorado – or as it came to be known the lost city of gold!

He suddenly finds himself alone and in the great jungle, he encounters Aztec blocks and Mayan temples, he starts to drop the blocks to reveal his fortune – sometimes multiplying it by up to fifteen! Help Gonzo catch the falling gold with his hat to win big big money. This truly is a treasure hunt that promises great riches and lots of fun along the way! Watch Gonzo moonwalk across the screen when the blocks fall in his favour and the multiplier starts going higher and higher.

The legend of El Dorado is one of legend, the story says that the kingdom was paved with gold and as far more fabulous than the Incan and Aztec riches that had been discovered earlier. The chief of the land of El Dorado was said to be so rich he bathed in gold, but alas this wonderous land was never to be found. It is believed that the rumour was born through the greed of the European and American people that wanted to conquer new lands and new peoples and take what was once rightfully theirs. Did this land ever exist or was it only a cruel joke played on the explorers of the time. Either way i am sure you will love playing Gonzo’s Quest.

Instead of the reels of this online casino slot spinning, they fall from the top of the screen to land and make up winning combinations. When a winning combination of symbols is made starting from the left side of the screen, the blocks that made up this win line will explode and disappear, allowing new blocks to fall into their place giving more chances to win big money. Every time a win line disappears and a new line is made with the new blocks then the multiplier which can be found in the top right hand corner will go up by 1. This carries on until the multiplier reaches x5 or until there fails to be a win line on the screen. 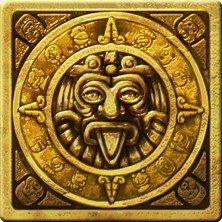 To enter this mode , you must first get 3 or more free fall symbols in 1 bet line when the avalanche drops the blocks. This will activate the 10 free falls. Like with all winning lines, the free fall symbols must start from the leftmost side of the screen. The multiplier is increased with every win and will carry on multiplying up to 15 times! With every win, there will be another avalanche just like in normal mode, giving many more chances to win those all important coins! During the 10 free spins in Gonzo’s Quest, you can win extra free spins by landing on 3 or more free falls again. The falls are then added to your free fall balance and played in succession.

The symbols values and information can be found in the pay table of this online casino slot. Here you can also find a table that shows you how the multiplier is used in this game, both in normal mode as well as free fall mode.

Game settings, volume and extra information can also be found in the left hand corner of the slot screen.

Autoplay feature can be activated by pressing the autoplay symbol. This can be altered to play at your preference.