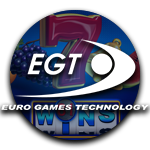 Euro Games Technology, also known as EGT, is a leading gaming manufacturer. The company has it’s headquarters in Bulgaria, and was founded in 2012 when they launched their first ever game – Gladiator. Within two years they participated in their first gaming exhibition in Moscow. After first expanding in east Europe, they made their debut in the gaming walhalla Las Vegas in 2008. Now, EGT is an expert in the creating, producing and distributing of both land-based and online games all over the world.

What does EGT offer?

EGT offers a large variation of games and solutions divided in 4 major categories: Games, Multiplayer, Interactive and Systems. We’ll provide a brief explanation on all four categories, focusing mainly on the interactive product.

Games:
Like most gaming manufacturers EGT’s roots lie with land-based casino games. Jackpot games such as 3 happy hits and Fu Gui Rong Hua (both local progressive games) are on their list of creations. An example of a cabinet they created is the Super Premier cabinet, which has two landscape curved monitors, LED illumination and an enhanced stereo sound system.

Multiplayer:
Euro Games Technology also produces several multiplayer tables which can often be found in land-based casinos, but are also used for live casino portals online. Examples are the Luxury 84″ live touch table which counts one roulette wheel and 6 seats, and the Rigel series which combines video slots and roulette games with a progressive jackpot system – Jackpot Cards, which will be further explained below.

The interactive department is what we find most interesting as this branche is responsible for all the online fun. After gaining experience for years from land-based games they are now offering that same experience and quality for online gamers. All games are created to work seamlessly on desktop and mobile devices, so that they’re available for people who prefer to play from home as well as “on-the-go” players. Besides slots and and video slots they offer top-notch table games, card games, jackpot games and even Keno. To give you a better impression of their work we’ve decided to list 5 of our favorites:

Systems:
EGT has three system solutions which they offer to operators: Video Lottery Terminals (VLT), Octopus Server Based Gaming (SBG), and Spider Casino Management System (CMS). We won’t discuss them too much but will still give a quick summary. VLT connects an unlimited amount of locations to one central server. This system allows easy monitoring and control of all gaming terminals in the network which makes it very adaptable to all sorts or updates and requirements. SBG allows clients to separate content and games from physical terminals as it provides operators with downloadable gaming content, which can decrease costs. CMS lends a helping hand with casino management tasks.

Ever since they launched their company EGT has always had a clear vision: “..to serve our clients worldwide with state of the art quality gaming entertainment and high level of customer care and service”. Staying true to this vision has contributed in their rapid growth which can clearly be seen in the results they’ve booked over the years. They have been investing a lot to adapt to regulated markets. Earlier this year for example their interactive branche obtained several gaming licenses in Romania, which cover both the production and distribution of gaming software. EGT is clearly a big player and we expect to see them expand much more over the upcoming few years.