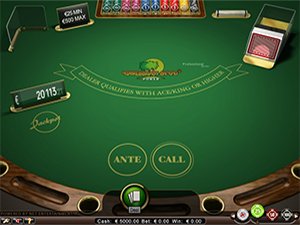 The poker game Caribbean Stud is a type of poker game which is similar in many ways to the five card stud version of poker. The main difference in this game compared to other forms of poker games is that Caribbean Stud is played against the house rather than against other players at the table. This makes it impossible to use the bluffing techniques, and makes it a straight game with no lies and deception involved. Where and when this great game was invented is not very clear as many people have laid claims to the invention of this innovative form of the table game.

Want to play Caribbean Stud for free? Click on one of the buttons below to open the game on mobile or desktop. Unfortunately the NetEnt version is no longer available on mobile. We’ve therefore added a Caribbean Stud table from SG digital for mobile users..

How to play Caribbean Stud Poker

To start the game the player must place a bet which is always called the ‘Ante’. The player and dealer are then dealt their respective hands of five cards each, however one of the five cards in the dealers hands will be turned face up. The other four will remain down for only the dealer to see. Once the player has seen the first card of the dealer and all five of his or her own they can then decide to stay in the game or fold straight away. Once the decision to stay in or fold has been made then there are the consequences. If the player decides to stay in this online casino poker game, they must raise the ante by double, yet if they fold they will lose the ante they placed in the first place.

If the player remains in the game then the dealer will check all four remaining cards in their hand, the dealer must have an Ace and King in his or her hand in order to carry on with the poker game in question. If the dealer does not have these two important cards in his hand then the player will win automatically. The win will win double the ante placed initially. If in the dealers hand there is and ace and king then both the player and the dealer must compare their cards, whoever has the higher hand wins. If it happens to be the player then he/she will win even money on the ante placed plus whatever additional payout is owed to them in accordance with the payout table. When it is the dealers hand that is the higher of the two, the ante and the raise are lost. In the situation that both player and dealer have the exact same hand, it is quits with the ante and raise being returned to the player with no wins or losses added.

You can read more about the payout table for Caribbean Stud be scrolling over the min/max sign on the table game screen. The minimum amount per hand is 1 euro and the maximum is 100 euros bet per round. This version of Caribbean stud poker also has a progressive jackpot game. This jackpot is won by placing an extra bet on the jackpot spot on the table game itself. Jackpot wins are paid out according to the hand you are dealt, the pay outs for the progressive jackpot wins in this online casino game can be found in the extra information tab – under the question mark symbol on the screen.