The Lost Pyramid is not your usual scratch card. The game is set in ancient Mexico, in the Mayan times.On the screen you will find a large temple made up of 36 carved bricks. Underneath this pyramid of blocks there are seven hidden golden blocks. The task at hand in this game is to uncover two or more of these seven golden blocks. The ancient Mayans were a wise nation and if you are wise enough you can win with The Lost Pyramid scratch card.

The Lost Pyramid unfortunately no longer exists. We’ve loaded a different scratch card that you can play for free, or click on the link below to play at an online casino! 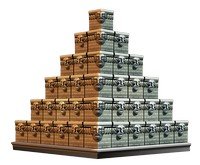 To start playing this scratch card you must first buy a card. To do this you can buy a  scratch card, these come at different values for this game. They start at 10 cents a game, 50 cents a card, 1 euro or even 2 euros for each scratch card the choice is yours. Once you have decided this you can then start to click on the blocks of your choice. Click on seven of the blocks to reveal what surprise is awaiting you underneath the blocks. For every gold block revealed you will be paid out as follows:

With a 10 cent bet per scratch card :

With a 50 cent bet per scratch card :

With 1 euro bet per scratch card :

With a 2 euro bet per scratch card :

If you want to reveal all seven at one go and in any random order the computer generates you can press the AUTO PICK button to turn all the stones around. If no golden stones are revealed the game is over and you can choose to purchase another scratch card to play on with. The theoretical payback on this online casino game is 92%.

Game information can all be found listed in the question mark button, volume adjustments can be made with the speaker button and pay table gives you the information on the pay outs as stated above. Hope you enjoy this scratch card with a difference.