The wonders of ancient Egypt are brought to life in this superb slot game. The usual suspects for Egyptian heroes are all there : The Pharaohs, Isis , Pyramids and Sphinx. The golden line multiplier offers up to five times the winning line – every spin has a chance to win on the golden line…making every spin five times more exciting! Ancient Egyptian people were drawn to their gods like casino players are drawn to these great slots!

Egyptian Heroes is only available on desktop. Check out our Video Slot page for a list of slots that you can play for free on all devices.

Ancient Egypt holds so much history and tales to tell, it is also famous for it’s gods and heroes. The worship of these Gods was the predominant religion in Egypt for over 3000 years before Christianity and Islam took over. Their were many different Gods which people in different areas worshiped as they all had a different meaning. They also believed greatly in the name of the God, and taking the name in vain had dire consequences to them and the community they lived among. Some of the more popular Egyptian Gods are : Anubis, who was the Osiris and Isis and was the God of the dead. Another son of Osiris and Isis is Horus, who is said that be half Falcon half human and later became the ruler after his father Osiris. There is much to learn about ancient Egypt and their legends, but start with playing Egyptian Heroes to get a heads up on what it is all about.

The Golden bet line is a registered trademark of Egyptian heroes online casino slot. This golden line runs through the 5 reels on each spin. If you win on this line you will be paid out the amount of your bet by the number on the Golden bet line multiplier, which can be found in the top right hand corner of this game. The multiples of this feature start from x2 up to x5 . If you are not playing using all bet lines, there is a chance that the Golden bet line will be a line that is not being used during your game. 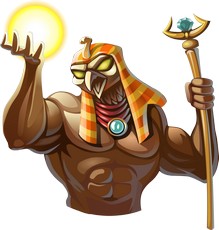 Egyptian heroes also has a quick spin option which can be found on the left side of the slot screen. Using this will speed up the time for each spinning reel to stop. Switch on or off as preferred.

Ambiance sounds, graphics quality and volume can all be adjusted by pressing the spanner symbol on the left.

Autoplay feature can be put into use by pressing the relevant symbol on the slot screen.