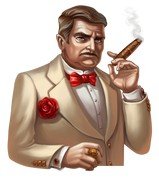 Kings of Chicago is an innovative game that is a mix between a poker game and a slot machine game. Set in downtown Chicago where the guys and dolls of old played poker and listened to Jazz…its all has a very mafioso setting , think smokey back rooms with gents in three piece suits smoking cigars and playing poker with heavily done up women standing around with their cigarettes on holders and their hair curled tight on their heads. To win in Kings of Chicago slot its simple- rules of poker apply, you need to have three of a kind, four of a kind, five of a kind, straight, flush or full house and thats your line. This is definetly the game for those of you who love poker and slots alike, with the cards being dealt rather than the reels being spun plus all the jokers that double up as wilds and scatter symbols that can appear on any card!

Kings of Chicago is only available on desktop. Check out our Video Slot page for a list of slots that you can play for free on all devices.

Kings of Chicago slot has a totally gangster theme, but not the modern day gangsters we see in movies. These are the old school gangsters that were active between the 1930’s to the 1960’s. These gangs were called The Chicago suits and The Philly Mafia or sometimes called the five families. These gangsters were part of and organized crime ring that worked much like a fmaily and held a strict code of honour. They would be involved in all types of crime from gambling, prostitution, murder and theft. Many movies have been made about them and their way of life, some of the more famous movies are Goodfellas and The Godfather and the Sopranos are all very famous gangster films and series.

This online casino slot game brings all the excitement of a game of poker. To win big money on this game, the cards need to be dealt in your favour. As with poker to win in this game you must get one of the following card combinations : 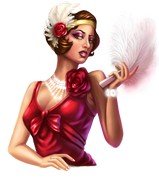 There are buttons in the bottom left hand corner of this online casino game, they have all additional information needed to play the game to best suit your needs. There you will find game setting choices, volume controller, King of Chicago slot information and the autoplay button.