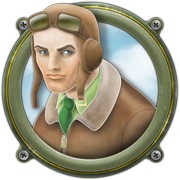 Pacific Attack setting seems to be Pearl Harbour , with fighter pilots , bombs , and pin-up girls . The year the war started was 1941 lasting almost four years , the war ended with the surrender of Japan. The Pearl Harbour attack has been romanticized as it has in this slot. The Pacific Attack feature game is a version of the old favourite – sea battle game . It starts with planes flying over a grid and droppig bombs, for every part of a battle ship that you hit you see the water exploding. You then have to choose which type of plane you want to use to drop more bombs in the areas of your choice , bomber plane, attack plane or a fighter plane. These each have different amounts of bombs they can drop – eight , four and two respectively. The bomber plane drops bombs with a lesser coin value than the fighter plane who only drops two bombs yet with a higher coin value. The graphics , sound effects an theme of this slot together make up an extremely enjoyable game.

Pacific Attack no longer exists. You can find a list of available slots on our Bonus Slot page. Or play Bonus Slots at an Online Casino:

The bonus game for Pacific Attack is based on the popular battlefield board game. By spinning 3 or more bonus symbols you will be transported to a grid, where bomber planes will pass over and drop bombs on the enemies hidden ships. Sometimes they will miss completely and sometimes they will drop bombs on parts of the ships. It is then your turn to choose which type of war plane you would like to fly over the grid with.

There are 3 planes to choose from :

Once you have chosen the plane you then go on to drop the bombs on the squares of your choice, if there is already a part of a ship that has been damaged it makes the most sense to try to find the rest of the ship around that area. Once you have foundall the ships or all your hits have been used up you will get the amount of coins won and go back to the Pacific Attack reels.

3 or more of the scatter symbols, these are in the form of the blonde bombshell blowing kisses, will give you the free spin round. Free spin amounts are awarded as follows in this online casino game :

During the free spin mode you can win more free spins by having 3 or more scatter symbols appear of the reels. The amount of new free spins is then added to your balance and played in succession. All wins in this round are tripled except for if you win the bonus game here.

This online casino game has a pay table on the main screen of the Pacific Attack slot, here you will find all the information about the symbols and their values.

Feature preview button can be found in the bottom right hand corner, for you to have a sneak peek of what the bonus game has to offer.

All other settings and features can be found on the bottom left corner.