What is the Megaways feature exactly?

Simply put, on this page we are talking about online casino games which offer the refreshing Megaways feature. This happens to be a game function which will let you play with a different number of pay lines on every single spin. Let’s have a look at Bonanza for example. When you open said game you will see that it has six reels with symbols, but no clear pay lines. Because the amount of characters that is shown on every reel is different every time you hit the spin button.

With this videoslot you will get a minimum of two and a maximum of seven symbols per reel, but that isn’t all. There is also an additional reel which is shown in the top of your game screen! That means the middle four reels will also get an additional symbol on top. Well now, if you are used to playing classic slots then you are probably asking yourself how you can create winning combinations in this game. Because you can’t create static pay lines when the number of symbols per reel is different every time.

But the answer to that question is actually pretty simple: You can make a winning combination in every possible way from the left to the right. So, the more symbols appear in your screen, the more pay lines you will get. In the case of Bonanza you may even get 117,649 pay lines at once. And did you manage to get one or more winning combinations? Then those winning symbols will disappear, after which they are automatically replaced. Which will in turn give you a chance to make even more winning combinations without having to place an additional bet! 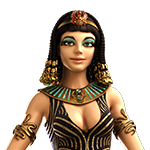 This game feature may be relatively new, but there are already a lot of different Megaways slot machines available on the internet. Said function has become incredibly popular among online gamblers, which means that developers are more than happy to put it in their games. But there is only one problem… The company that came up with Megaways is called Big Time Gaming or BTG. They are responsible for many different Megaways slot machines, like Queen of Riches, Bonanza, Starquest, Extra Chilli (which is also known as Bonanza 2), White Rabbit and Who Wants To Be A Millionaire. And as you probably know, most of those games were a huge success. Especially Bonanza became quite the phenomenon, which probably made the other developers pretty jealous.

But again, BTG has the patent for this game function, meaning no one else is allowed to use it. So, what other options are there? The developer called Blueprint Gaming came with a pretty interesting solution. They simply released a number of games with a license from BTG! And these also seem to have become extremely popular.

Well now, we know that there are two different developers that have created Megaways slot machines. But which are actually the best ones? As mentioned before, Bonanza was one of the first ones and it is still unbelievably popular. So that one definitely makes the list. Furthermore, Genie Jackpots Megaways, Diamond Mine Megaways, Vikings Unleashed Megaways, Buffalo Rising Megaways and Primal Megaways are also extremely highly rated by review websites. And the funny part is that those are all made by Blueprint Gaming and not by BTG!

What it comes down to is that Blueprint actually seems to develop the best Megaways slot machines at this point. They keep releasing the one after the other, but players don’t seem to get tired of this feature at all. Except when it comes to Who Wants To Be A Millionaire by Big Time Gaming, by the way. Because that particular videoslot has a bonus feature which is downright frustrating and which simply sucks all of the fun out of the game.