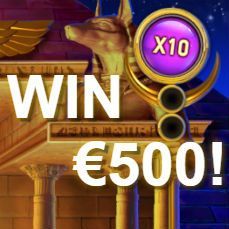 Win €500 in this week’s CasinoCasino Challenge!

Monday is probably the most disliked day of the week. We’re all bummed out that the weekend is over already, but that doesn’t mean you can’t start this week on a positive note. CasinoCasino has just announced it’s brand new challenge – and we think it will brighten up your day!  Check out how you can win 500 euro extra this week.

The star of this weeks challenge is a slot that’s loved by many players. By far one of the most popular ancient Egyptian themed slots: Pyramids: Quest for Immortality. Casino Casino is offering a pretty sweet bonus in their challenge this week. To qualify for the bonus, you must play Pyramids, and hit the highest multiplier of x10. Is that easy? No. Is it impossible? Also no. We’ve added a short walk-through of how the slot works, and how you can spin yourself to an extra 500 euro bonus!

There are a few important things to know about Pyramids: Quest for Immortality. Firstly, this isn’t your standard rolling reel set-up. Instead, the slot had 5 reels with 3-4-5-4-3 rows, and is thus shaped like a pyramid. Rather than rolling on the reels, the symbols all fall from above the reels into its place. A similar set-up can be seen in Gonzo’s Quest.

The second thing you need to know about the slot is that it has two main features: the Wild Generation feature and Avalanche Multipliers:

Since you’ll trigger an Avalanche after each winning combination, it’s relatively easy to hit some killer combinations. So even if you don’t hit the maximum multiplier, we’re pretty sure you will still enjoy the slot on it’s own. If you do hit the highest multiplier, make sure you make a screenshot which clearly shows the date and the time. All you have to do after that is send the screenshot of your win to the customer support team of CasinoCasino, and wait till you receive 500 euro extra bonus!

Check out the full terms and conditions here. Good luck!