The game preview of Planet of the Apes is live – and it’s epic.

Every once in a while a slot provider presents something different. Something fresh, something unique, something we’ve never seen before. Something exactly like Planet of the Apes. When NetEnt announced they were working on a slot adaptation of the immensely popular franchise, we were more than just a little bit excited. They knew they had to deliver something extraordinary for this one, and boy will they. Ever since the preview arrived, everyone’s been raving about how shockingly good this slot is promising to be. Curious what’s so special about it? Keep reading.

The Rise and Dawn Wilds, Scatters, Bonus feature and Free Spins symbols are all treated as separate symbols in that specific area and counted separately. They can not be combined. So if you hit 2 Scatter symbols in the Rise area and one in the Dawn area, you will not have a complete combination.

Wild Symbols
Both the Rise and the Dawn area have Wild symbols. They can award you with a coin win of up to 600 if you manage to hit a combination of 5 of them, and will also substitute all symbols except for Scatters and Bonus symbols. 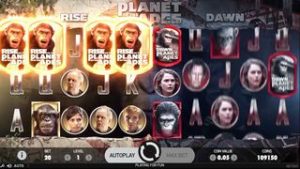 Bonus Features
The Bonus Features can be activated by landing the Bonus symbol in a spin. The Rise Bonus symbol lands on reel 1 in the Rise area, whilst the Dawn Bonus symbol lands on reel 5 in the Dawn area. If you’ve activated the Rise Bonus feature, you will receive an extra coin win that is awarded for every single character and ape symbol that are visible in the Rise area at that time. Scatter symbols are not included though. If you activate the Dawn Bonus feature, all ape and character symbols in the Dawn area will be transformed into the same symbol.

Stacked Wild Feature
Last but not least, the second combining feature involves Stacked Wild symbols. This feature is activated when a reel in the Rise area is fully covered with Wild symbols. The reel will then be duplicated tot the Dawn area on the same position, therefore creating a fully Stacked Wild reel in both playing areas.