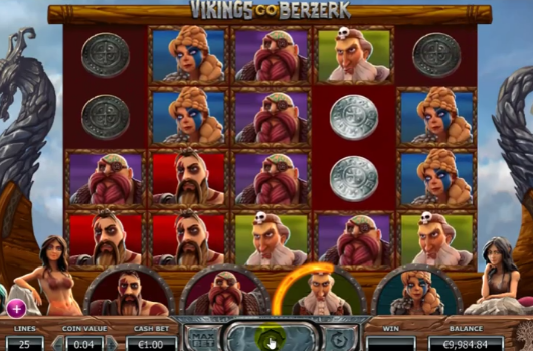 Yggdrasil’s Vikings go Berzerk is all the rage

It’s been exactly one week since Yggdrasil launched their newest video slot: Vikings go Berzerk. The slot matches well with the name of the game provider as according to Norse mythology “Yggdrasil” is a mythical tree that connects the nine worlds.

Vikings go Berzerk is a Viking themed slot with 5 reels and 4 rows. The slot has 25 fixed bet lines and comes with some original features such as the Treasure Chest and Rage Mode:

Treasure Chest
There are two treasure chests. The normal chest which lands on reel 4, and the golden chest which lands on reel 5. When you spin a treasure chest 5 boxes will appear. Each box contains a prize and the player can pick one of the boxes. Prices vary between 50-1000 coins in the normal chest and 250-10000 coins in the golden chest + 7-21 free spins can be won in both chests.

Rage Mode
The game features four Viking characters. Each characters has it’s own rage meter which will fill up bit by bit every time you make a win on the viking. Once the rage meter is filled up the