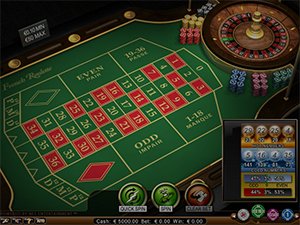 French roulette is the oldest type of roulette game around. The Roulette game was actually invented in France before gaining popularity all over the world. Though American roulette and French roulette may share some common denominators like the roulette wheel and the fact they are both played on a table, there are also some major differences in the two variants of this classic casino game. French roulette has some additional rules to the more popular American game of roulette. French roulette is not typically played in just any casino, in fact it’s rare you find it outside of France! That was until the online casino revolution took over, now you can play it online anytime and anywhere.

Update: the old French Roulette Pro game from NetEnt is no longer available. You can try out other French Roulette tables (from the same provider) below for free. Click on the top button if you’re currently using a mobile device, or if you want to play in full screen. The bottom button will open the game on this page and is only suitable for desktop users.

While most of the rules for roulette and the aim of this online casino table game remain the same, here are some differences that you will notice from game to game. Firstly the table layout is very different to Classic roulette, the wheel is sometimes in the centre of the table, however in this particular game it is at the top end of the table. The number between 1-36 that are normally blacks are not in this style of game. However they still count as black when the ball lands on one during a spin.

If you are familiar with roulette, then playing this game is simple. There are only a couple of extra bets that are offered in this game, that are called ‘call bets’. These bets can be anything from all the neighbours of zero, to all numbers that end with two of you chosen numbers. For example, 3,13,23,33,4,14,24,34. All payouts are as usual present on the roulette table, and are paid out according to the bet the player initially placed. The minimum bet for this game is 1 euro, and the maximum is 500 euros. If you choose to play the maximum bet, you can divide the 500 euros in any way you like over the table. Chip values are 0 ( delete chip ), 1, 5 and 25. The maximum amount for any one bet placed is 100 euros each.

There is a billboard in the bottom right hand corner of the table game, this will depict the hottest four numbers from the last 500 spins as well as the coldest numbers from the last 500 spins. By clicking this you will be able to place bets on all four number in one go. This billboard also tells you which colour and whether odd or even where the most popular wins over the last number of games. There are four buttons that appear on the centre of the screen, Same bet, Spin, Quick spin and Clear bets. The dolly is used in French roulette also to mark the winning number.

Game setting options are on the screen under the spanner symbol and extra information about the game and the rules of playing can also be found under the question mark thumbnail. Good Luck!