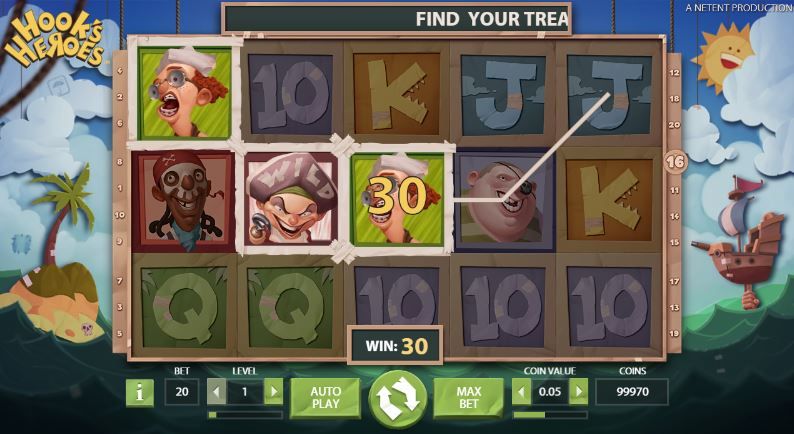 It’s not official yet but the new slot game Hook’s Heroes from Netent is now live at Klaver Casino! Over the weekend we have tested the full Hook’s Heroes game play for Fun and Real money to write a review for all onlinecasino1.com readers. Fortunately for us it was a very profitable weekend, but is this new online videoslot worth your cash? Read more to find out everything about this new slot game or sign-up directly at Klaver Casino to discover if it’s your lucky day!

Not one, not two, but three unique features!

All online gamblers are interested in the RTP (return to player). Unfortunately Netent has decided to give the new online videoslot Hook’s Heroes one of the lowest RTP’s possible with a percentage just below 97%. For Netent slots not a lot but still better than most other game providers. One point that will make up for this RTP is the amount of unique features integrated in Hook’s Heroes, they are named Fairy, Mermaid and Pirate feature. Two features you can recognize from earlier Netent releases. For example the Fairy Feature will pop up to 5 wilds in random positions. The Mermaid will give all winnings a multiplier, 2 times with a normal win and 4 times once there’s a wild involved. The Pirate is quite unique in his kind by making any combination possible, the symbols doesn’t even have to be on the same bet lines! Wilds are excluded once you have activated the Pirate Feature.

How to play one of these features?

Easy, click on the spin button and try your luck! Hit 2 scatter symbols and you will receive one of the 3 features above. With 2 scatters you can’t pick the kind of feature you will receive, it will be absolutely random! One spin not enough? You might be lucky and hit 3 scatters in one spin. At this moment you will be able to pick one of these 3 features. The amount of free spins say a lot about the value of each feature. You will find out that the Fairy is the most valuable with 7 spins, followed up by the Mermaid with 10 spins and as least valuable you can play the Pirate feature with 15 free spins. If you hit 4 or 5 scatters you will be able to pick multiple free spin games (2 or 3 of them respectively).

Hook’s Heroes slot worth a try?

No, we would not play this game for real money on a regular base. As with every Netent release you always should try the new slot games. Unfortunately I can not really recommend this new slot game, I think Netent (and other providers) have much better games to offer. In case you do like this game you will defenitely like other recent releases like Tornado Farm Escape and South Park Reel Chaos (both slots with some features).

How does an early Netent release work?

Loyal online casino players know that some casinos have the benefit of early Netent releases. A good example is Mr Green, this online playground launches almost every new Netent slot about 3 months before the official release date. After a couple of weeks Netent will take the slot game offline again for some final optimization. After this process it’s mostly the Dutch brand Klaver Casino and Betsafe that will launch the game for good about 1 or 2 weeks before the official release date. This time Klaver Casino was the first casino to launch the new game Hook’s Heroes last week Wednesday. Both Klaver Casino and Betsafe won’t have any campaigns around these slot releases as it would give them an unfair advantage against the rest of the casinos that will have to wait up to September 22, 2015, the official Hook’s Heroes release date.