If you have a smartphone it’s almost inevitable that you’ve, just like everyone else, been sucked into the craze of downloading the latest apps, countless forms of social media, and yes: Emojis. You know, those funny little characters that you send to “express your emotions”, or use when you simply don’t feel like typing. Tomorrow,  NetEnt will launch their brand new slot called Emoji Planet, inspired by those little characters. We’ve checked the preview and are happy to give you more information and our opinion so far below, one thing we know for sure: you will either love it, or hate it.

First things first, Emoji Planet is not your typical 5 reel – 3 row video slot. It’s a Cluster Pays slot with a total of 30 symbols.  A win is awarded when you hit 5 or more symbols in a cluster. Symbols are part of a cluster when they are adjacent (horizontally or vertically) to an identical symbol. Lovers of NetEnt slots will recognize this set up from Aloha! Cluster Pays, which was launched in March last year. We’re quite excited to see that the new slot uses clusters rather than reels, simply because sometimes we just get plain bored by the standard set up. The used symbols in the new Emoji Planet slot go hand in hand with the theme. The recognizable emojis featured in the game are:

The brand new slot will also feature a Wild symbol, which can appear on all the reels and will substitute for all symbols. Furthermore, the slot will show five individual meters, which are each connected to an Emoji feature. The emoji’s chosen for these features are the two low win symbols, and the three medium win symbols. Whilst creating winning combinations, symbols are collected and used to fill up tot meters. When one of the meters is filled up completely, the corresponding feature will be activated. The Two Hearts feature is a multiplier feature, which pays out the total win multiplied by the amount of the times the meter was filled up + one. The Bomb feature will destroy 8 random symbols across the reels, after which a coin win between 5 and 100 times the best level is awarded for each destroyed symbol. When the Pizza feature is activated, an overlay of 3×3 random symbols will appear. The Kiss Mark feature activates 3 Sticky Wild symbols. The 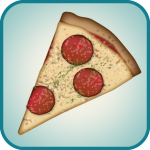 Sticky Wild symbols don’t immediately disappear after one combination, but instead have 3 “lives”. Whenever one of the symbols is part of one or more winning combinations it loses a life. The symbol will stay on the reel until it lost all 3 lives. Last not but least, the Rocket feature activates a stack of 10 Wild symbols that fall on and above one of the reels.

Feature wise we have nothing bad to say about this slot. Sure, it doesn’t offer free spins or a bonus game, but what it lacks in that department it makes up for in special features during the main game. What we think will be a make or break for players will be the graphics and ofcourse the pay outs. You’ll either find the slot highly entertaining or highly annoying. Don’t shoot it down before you try it though! Since tomorrow is the official launch date we’d recommend you to take a look at this Casino, as we just got confirmed that they’ll be offering players free spins to try out